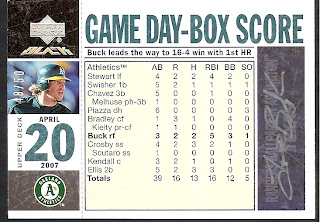 Front Design: The horizontal cards have a box score from a significant game in the player's career - for example, the Travis Buck card's box score above highlights his first career home run and reaching base 5 of 6 plate appearances. The left side of the card has (from top to bottom) the UD Black logo, a small photo with a serial number, the game date, and a team logo. The right side of the card has a dark box with a silver-pen autograph. 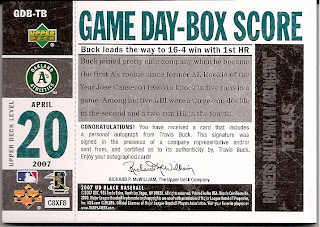 Back Design: The back has the same basic layout as the front, with design elements changed. The middle has a highlight writeup from the game and an authenticity statement, the left contains the card number, team logo, game date, and licensing logos, and the "autograph" area contains the location of the game celebrated on the card.

Parallels and Similars: Two parallels, numbered to 10 and 1/1, were also issued. There are other Game Day sets (ticket autos and lineup card autos) in the release.

Distribution: Cards were randomly inserted into packs of UD Black - a two-pack-per-box product where every card in the set is autographed, and each pack contains only one card. The Game Day Box Score set is serial-numbered to 50.

Thoughts: Any UD Black card is a good card - all cards are autographed and numbered to 99 or less. Players like Travis Buck can come cheap, though this is a landmark release and commands a premium because of its initial pack price. I like the idea of a set that highlights a specific event, as this set does. It's more than just an autograph!
Posted by Ryan G at 3:00 AM