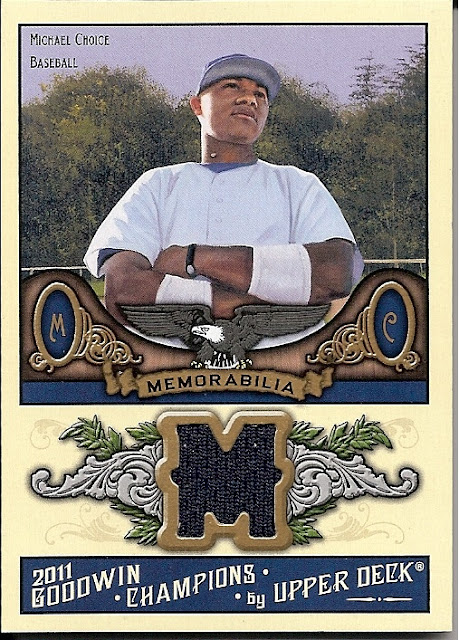 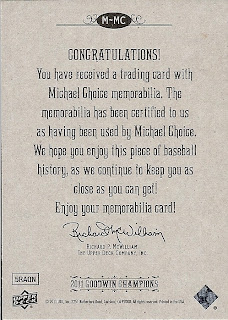 Front Design: The fronts are designed similar to the regular Goodwin Champions release. The player's photo is at the top, with his or her name and sport over the photo. A curved banner containing an eagle and the letters "M" and "C" identifies this as the memorabilia set. The memorabilia itself is contained in a gold-bordered "M" cutout, with embelishments on either side. The Goodwin Champions logo banner is across the bottom.

Back Design: The backs are much less detailed, and are printed on gray cardstock. The card number (or letters) are at the top, followed by authentication text. Copyright and logos are at the bottom.

Parallels and Similars: A dual memorabilia parallel exists for 11 players, but they are easily distinguished from the regular set.

Distribution: Memorabilia cards were inserted about one per box of 2011 Goodwin Champions. They are separated into groups, with the easiest group being 1:22 packs and the most difficult single-memorabilia tier at 1:14,613.

Thoughts: Goodwin Champions had its detractors because of the use of casual images, but I think it is one of the best releases of the year. The memorabilia checklist is pretty impressive across several sports, which makes this set even better of a multi-sport release. This is the first 2011 card featured in a long time, and the first relic card on the blog.
Posted by Ryan G at 3:00 AM