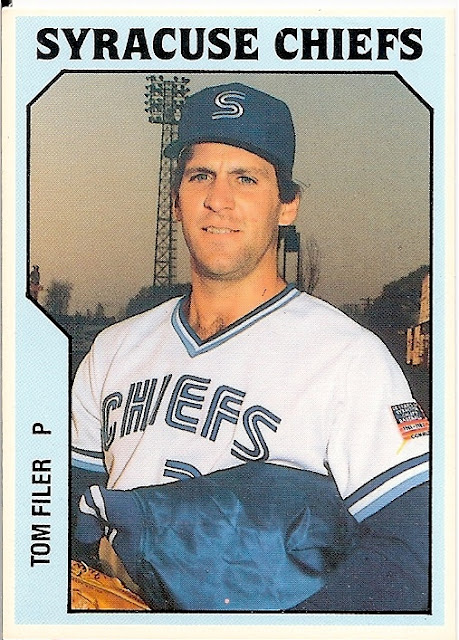 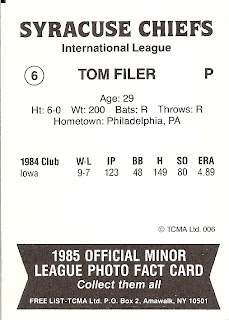 Front Design: The cards feature a blue border with the team name at the top, and the player's name and position sideways on the left. The color player photo is surrounded by a thin black frame. (Note: my card contains a white border as it was apparently reprinted by the company for use in a collecting kit.)

Back Design: The backs are black and white, with the team and league name at the top, followed by the player's name, position, and uniform number. Vitals and prior-year statistics follow, with a TCMA advertisement in a banner across the bottom.

Parallels and Similars: As noted, this card is part of the reprinted issue; real 1985 TCMA cards would have a blue border that reaches the edge of the card. All 1985 TCMA minor league sets follow the same design.

Distribution: The team sets were given to teams for sale or distribution at the ballpark; additional quantities were sold through hobby channels and the manufacturer. Approximately 3000 sets were made. The entire set was not subject to reprinting, and I believe only the Tom Filer card should be expected to be part of the reprinted cards.

Thoughts: The black border confines the image a bit more than necessary, as does the big cut taken out for the player's name. The card has about the same feel as any other TCMA issue in terms of design and quality.  I'm not sure why Tom Filer was chosen for reprint, except than he had a pretty good year with Toronto in 1985, going 7-0. He must have had an injury, because he didn't pitch anywhere in 1986 and 1987, and wasn't really successful when he returned in 1988. He's a coach with the Altoona Curve now, according to his sparse Wikipedia page.
Posted by Ryan G at 3:00 AM