Let's finish off the phone card trilogy with this one! 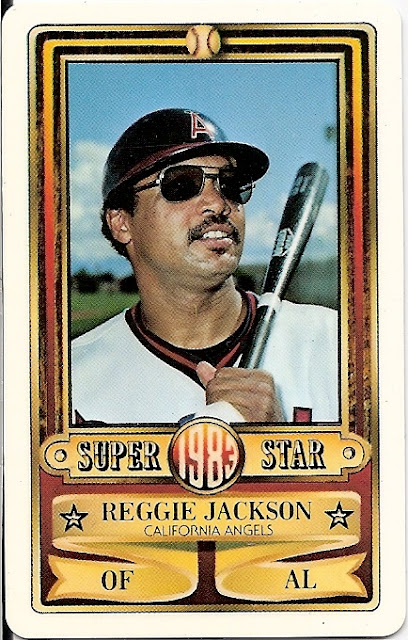 Front Design: Two years from their first release, the design has changed greatly. The card is vertically oriented, with a color photo inside a gold border with a 1983 Super Star "plaque" beneath. A gold banner lists the player's name, team, position, and league. A white border surrounds the photo's frame. 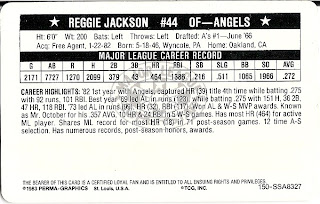 Back Design: The backs are the same as the 1981 release, with the player's vitals, career statistics, and a highlights biography. Lacking from this card is a box at the bottom for player signatures, though at least on Jackson's card, the space remains. The biography of Jackson's card is slightly updated to reflect his accomplishments in the past two years. Reggie Jackson is card 27 in the set, and if you look closely in the bottom right corner, the last two digits of the card code represent the card number.

Distribution: Cards were again produced in cooperation with Topps, and sold in complete set form.

Thoughts: The front design has become much more ornate, from a simple photo and text to this fancy plaque motif. The design itself isn't bad, but certainly feels like an early-80s Topps release. Despite the credit card material, size, and feel, they look like cards. It really wouldn't be until 1995 Studio's release that a card release looked like credit cards.
Posted by Ryan G at 3:00 AM