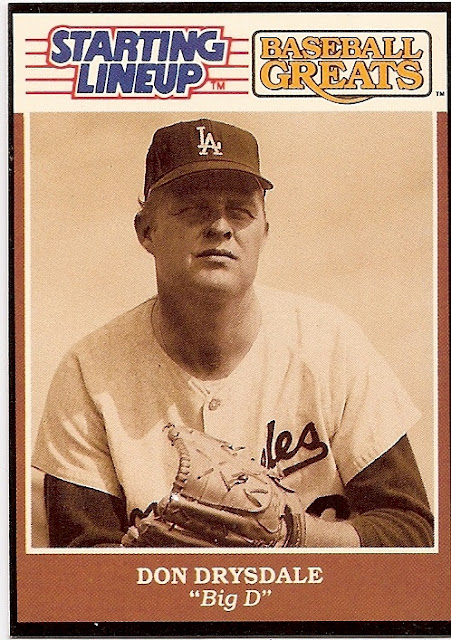 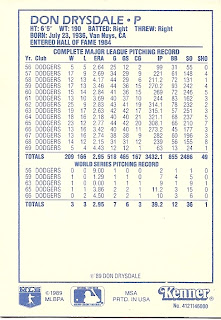 Front Design: The player's photo appears in sepia inside a white border. The top of the card is a white banner with the Starting Lineup Baseball Greats logo. The rest of the card has a brownish border; the player's name and nickname appear in white beneath the photo.

Back Design: The blue-on-white backs contain the player's vitals and complete career statistics including postseason play.

Distribution: Cards were included with Starting Lineup player figurines. The figurines and cards were sold in pairs, with each player paired with another specific player that shared similar traits, or (more often) played on the same team. There is an odd number of cards, which means at least one player was in multiple pairings. Cursory research determined that Hank Aaron appears with Carl Yastrzemski or Eddie Mathews. Both pairings include the same card and figurine. I didn't see any other dual pairings, but they could exist - there are four Yankees in the set that could be rearranged. All packaging-back images shows seven pairings, accounting for 14 figures - even the Yaz/Aaron pairing shows the same seven arrangements, even though they're not on an advertised pair. While there don't appear to be any card variations, there are figurine variations, most notably the Ruth/Gehrig appearing in both home and away jersey colors.

Thoughts: Starting Lineups are cool. They were inexpensive action figures of the best baseball players of the time, AND they came with a card, too! They represent the time when toys and figurines were still about being fun, though collectors were taking note. They don't have the detail of a McFarlane, but they don't carry the price tag of a McFarlane. Unfortunately, the better quality won out, so SLUs stopped being produced after 2001.

Checklist: Cards only - figurines exist for each card, but other than the Ruth/Gehrig variations mentioned above, I'm not aware of any variations. The cards are unnumbered. If you know of any variations not listed please let me know!