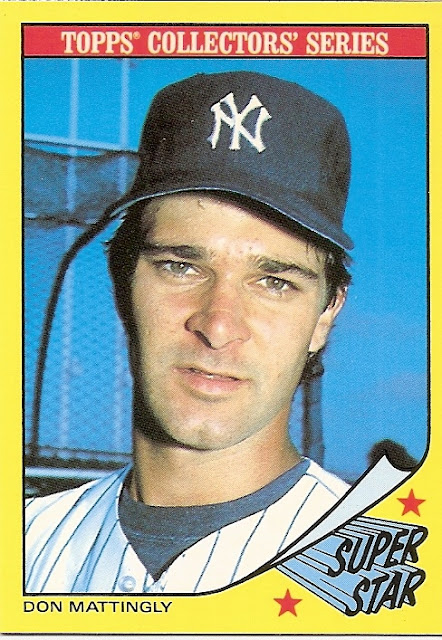 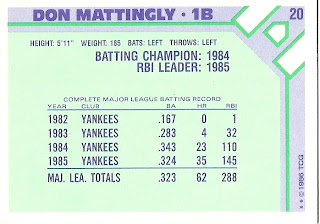 Front Design: A color photo is surrounded by a thin black border with a turning page design like the 1961 Topps issue. Unlike the 1961 set, this has yellow borders; "Topps Collectors' Series" appears at the top, and "Super Star" shoots from behind the photo. The player's name is in the lower-left corner.

Back Design: The blue and green toned backs have a white border; the background resembles home plate, the batters boxes and foul lines. The player's name and position is at the top, along the first base foul line; vitals and career highlights are beneath in "fair" territory. Yearly and career statistics for batting average, home runs, and RBI fill the rest of the card; the card number is in the upper-right corner and copyright information ((C) 1986 TCG) is in the lower right.

Distribution: The complete 33-card set was issued in its own small box, similar to a deck of playing cards, and sold in Woolworth's variety stores. The checklist is on the back of the box.

Thoughts: While the box identifies the set as a Woolworth's issue, there is no logo or other identifying information to link the cards themselves to Woolworth's. There are several issues which have this issue. Unlike yesterday's MSA/M&M's release, this Woolworth's set has team logos and better photography. Granted, Topps probably did all the work on the design. Until now, I never noticed the homage to 1961, but it's a nice touch. The yellow isn't as overwhelming as 1991 Fleer, but it detracts a bit from the card.
Posted by Ryan G at 3:00 AM