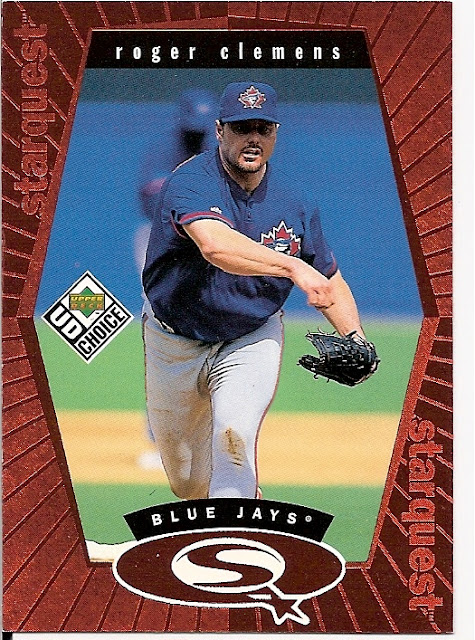 Front Design: In a design similar to, yet even more confining than the flagship 1999 Upper Deck release, a color photo is inside a red foil trapezoid with lines emanating from the center of the card. The player's name is at the top, with his team and the StarQuest logo at the bottom. 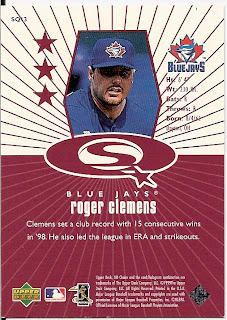 Back Design: The lines and red color repeat in the background. A cropped version of the picture is at the top, with the team logo and player's vitals. The player and team names and a career highlight appears beneath the StarQuest logo.

Parallels and Similars: This red version is a parallel of the "base" blue version; gold and green are the other two parallels. The StarQuest line was migrated to flagship Upper Deck and used as retail inserts in 2008 and 2009.

Distribution: Red parallels were inserted into packs of UD Choice at a rate of 1 in 23 packs.

Thoughts: I have a hard time finding red foil attractive. The same can be said for gold foil, only because it's been used so much by now. The cards aren't ugly, and can certainly be seen mixed in with a stack of base cards. For an insert in a low-price release, it's not too bad. I would like to have seen more done with the space on the back. Roger Clemens did much more in his career before the 1998 season!
Posted by Ryan G at 3:00 AM