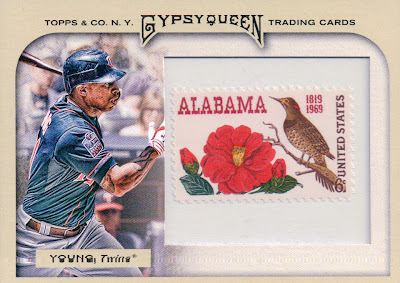 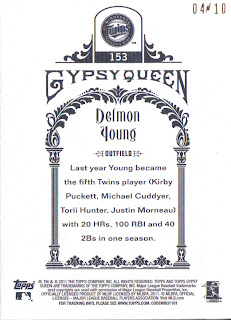 Design Notes: The design follows the basic look of 2011 Gypsy Queen in a horizontal format. The artwork is seem on the left side of the card, and a stamp related to the player's hometown is included as a relic on the right. The backs look essentially identical to the regular Gypsy Queen cards except for a serial number in the upper-right.

Parallels and Similars: The set is a parallel of the base Gypsy Queen set, and there are a handful of other parallels.

Thoughts: While I really enjoy the art of Gypsy Queen and thus put together the base and insert sets in 2011, I had no interest in collecting the parallels and minis, and this set is no different. Stamps are a simple novelty as far as "hits" go, and while I enjoy gimmicks at least as much as the next man I don't care much for them in parallel form. Thankfully, I picked this up much cheaper than I expected as it was included in a lot of other Delmon Young cards.
Posted by Ryan G at 3:00 PM