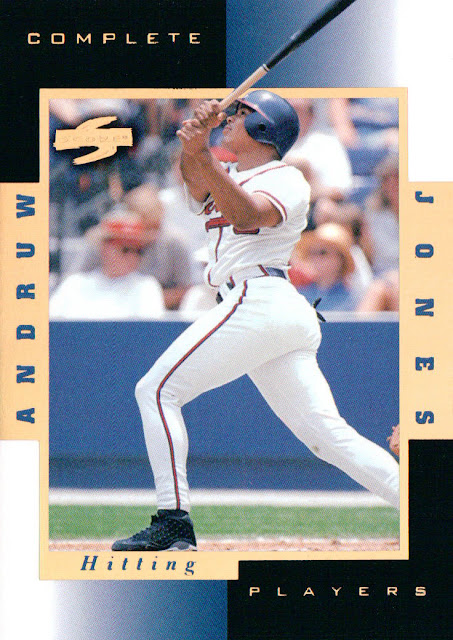 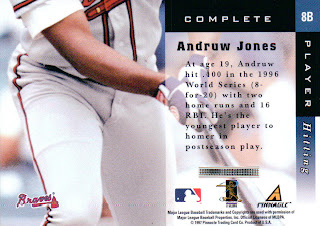 Design Notes: A simple design on the front uses a lot of rectangles and wide-spaced text with the player's name and one of the three aspects that makes him a complete player. Fronts use gold foil highlighting. The backs explain how the player excels in whatever aspect is mentioned on the front, and a third of a photo of the player is on the left. The backs serve as a three-piece puzzle.

Parallels and Similars: While this is the gold parallel version, it is actually more common than the original holographic foil release. There was also a release in that year's traded set, and a sample version (with a differently-arranged checklist) as well.

Distribution: Gold versions were inserted into packs of Team Collection at 1:11, while the regular cards were found in 1:23 packs of the regular Score release.

Thoughts: This is a nice-looking set with a decent concept. The photography is pretty nice, as well. Unfortunately, in a hobby flooded with insert sets that year, this release doesn't stand out much. As for Andruw Jones, he was a phenom at 19 years old, and served as the face of the Braves for several years. But when the steroids allegations started flying in 2007, his production crashed and he was soon off to another team. He hasn't really been named as being a steroids user, but it was interesting timing that he would have such big problems at the plate when the scandal really started. Jones was a great fielder, though, and never put up a high batting average. He made tough plays look easy when most outfielders try to make easy plays look tough to end up on SportsCenter. Jones is still playing - he was with the Yankees in 2011 and 2012.
Posted by Ryan G at 3:00 PM