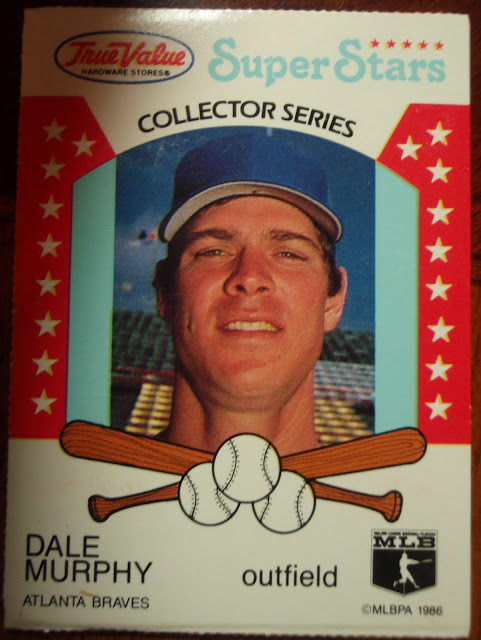 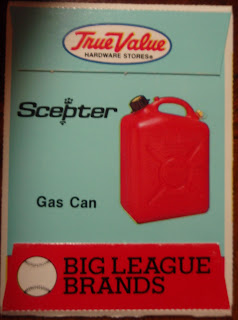 Design Notes: The photos are airbrushed and cropped small, as the border surrounding the card contains the True Value logo at the top, several stars over a red background on the sides, crossed bats and balls towards the bottom, and the player's name, team, position, and the MLBPA logo at the bottom. Backs are black on white and contain some recent stats, biographical information, and and a short highlight paragraph. The cards are often still found in folded panels of four, with only the top card visible. The back of the panel-pack shows the fourth card, which features a product (as you can see, my panel advertises a gas can). The product card has a sweepstakes offering trips and prizes. On this panel, Murphy is joined by Robin Yount and Tom Seaver.

Parallels and Similars: None known. There is one error/variation in the set - Don Mattingly has a card which lists him as being an infielder.

Distribution: Panels were given free to customers who spent at least $5 in the store.

Thoughts: Dale looks like he's staring into the sun, or about to get his teeth drilled. On the other hand, this set has a fairly fun front design for an oddball issue of the 1980s. Too much of the front is used for the design, though - this layout wouldn't fit in today's products. Being a logoless oddball set of the 1980s, its value is quite low but the set has several superstars and Hall of Famers.
Posted by Ryan G at 3:00 PM