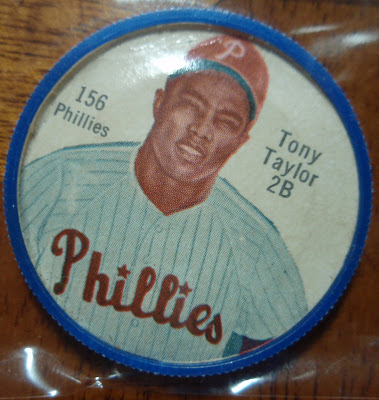 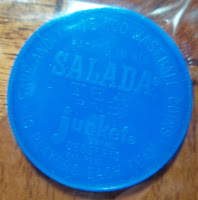 Design Notes: These plastic discs contain a color portrait on the front, which is actually a paper insert on the inside. The plastic discs themselves could be one of several colors, with the text on the "back" embossed or pressed into the plastic. The color portrait front also contains the disc number, team name, and player name and position.

Parallels and Similars: Other coin issues have been made by Salada and other companies, but this is distinguished by the plastic disc and text on the back.

Distribution: Coins were included with Salada tea packets and Junket pudding mixes. There are 10 players for each of the 18 original teams, with an additional 20 subjects for the Mets added in a later version. In addition, several players were updated with new teams and 21 players were replaced with new subjects (with higher numbers - 201-221). The updated players make the total number of variations/coins available 263.

Thoughts: I like oddball issues and this one is fairly odd. These don't really feel like "coins" but discs because they're made of plastic. These are fairly small, but it would have been cooler if action art was used instead of portraits.
Posted by Ryan G at 3:00 PM