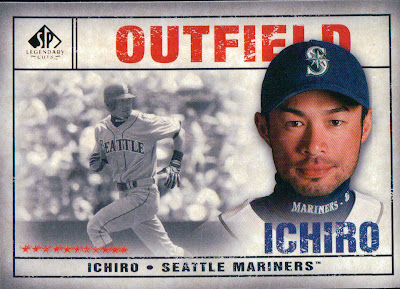 Design Notes: A horizontal card with a greyish background, the player's name is at the bottom along with his team. A black-and-white action photo is paired with a color head shot. The backs use the same basic design as the front, carrying over the position at the top of the card as well as the headshot. A short writeup and career statistics are included.

Parallels and Similars: Only one parallel set was issued, the 1-of-1 serial-numbered Memorable Moments.

Distribution: Each box had 12 packs of four cards, though four packs held memorabilia cards and six packs included a Yankee Stadium Legacy card, plus there was a chance for autograph cards. Building a short set would take at least three boxes.

Thoughts: I like the design of this set. It's got a lot going on but it's not too busy, and it's not as "clean" as most Upper Deck releases, fitting in with the historical vibe the set was hoping for.
Posted by Ryan G at 3:00 PM