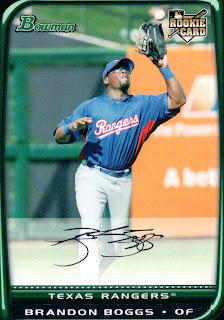 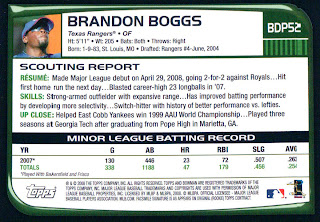 Design Notes: A green "shiny" border circles the card. The player's name, team, and position are beneath the photo and a semi-opaque white rectangle at the bottom of the photo frames a facsimile signature. Backs use the same basic design, reminiscent of a modern television screen. A detailed scouting report and some statistics fill the majority of the card.

Parallels and Similars: A prospects set contains players who had not yet played in the major leagues. Multiple colored parallels of this set and the prospects set, plus chrome and multiple refractor versions were issued. Additionally, this design was also used for the regular Bowman/Bowman Chrome release. This set is identified by the green border and the card number prefix: BDP. Prospects have the prefix BDPP.

Distribution: Hobby boxes contained 24 packs of 7 cards each. Two of the seven cards were from this set, two were Bowman Chrome cards, two were prospect cards, and the final card was one of the parallels.

Thoughts: Ever since Bowman has been using the same basic design and color scheme I've had no interest in the set. The use of the same design over three releases with complicated naming/numbering schemes make the releases difficult to distinguish. With similar designs from year to year, no one year stands out over others.  Of course, Bowman is a prospecting release and most purchasers are interested in the latest rookies.
Posted by Ryan G at 3:00 PM