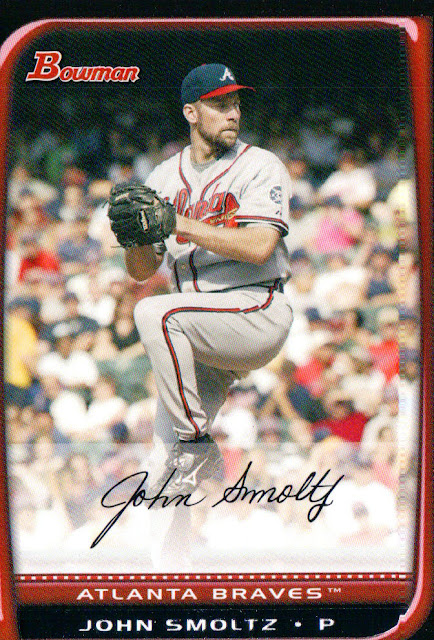 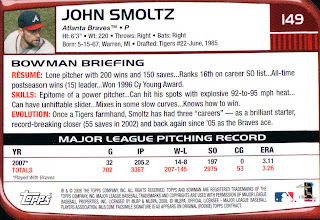 Design Notes: A television-style red border surrounds the veterans, while a green border is used for rookies. The player's name, team, and position are printed at the bottom, and a facsimile autograph is placed in a semi-opaque box at the bottom of the photo. The backs contain a scouting report ("Briefing" for veterans) plus some statistics.

Parallels and Similars: Red, blue, gold, and orange parallels were inserted into packs, and the design was also used for the Bowman Chrome and Bowman Draft Picks & Prospects sets. Additionally, a Prospects set for each of these releases uses the same design with white borders. Flagship Bowman cards are identifiable by the card number having no prefix, and the front logo being just "Bowman" instead of "Bowman Chrome".

Distribution: Cards were sold in hobby (jumbo and regular) and retail (various pack types) configurations. Due to the inclusion of Prospects and Chrome Prospects cards in the Bowman flagship release, only a percentage of the cards in each pack were from this set.

Thoughts: I'm glad to have John Smoltz as my type card for this set, as he is one of my favorite pitchers. The design is similar to all of Bowman's designs for at least the past 12 years, and none of them stand out as good. I've come to dislike black borders, too, due to my scanner auto-cropping the cards. It isn't ugly (I don't like the row of dots above the team name) but it's one of Bowman's weaker designs.
Posted by Ryan G at 3:00 PM

Email ThisBlogThis!Share to TwitterShare to FacebookShare to Pinterest
Labels: 2008, bowman