The last two sets have been modern era releases, although they have been throwbacks. How about we go back in time again? 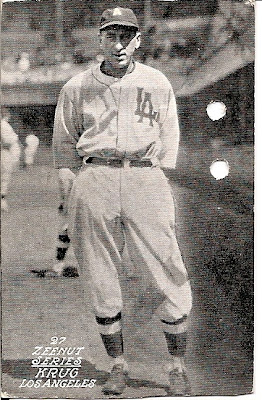 Front Design: Zeenut cards followed the same basic design for their entire run. The card was a full-bleed black and white photo, with the player's name and team, Zeenut labeling, and for most years, the year of issue. The cards were issued with coupons attached to the bottom which could be traded for prizes, but it is rare to see cards with the coupon still attached, and those cards command a significant premium.

Parallels and Similars: As mentioned above, Zeenut cards are almost identical from year to year, and it can be difficult to tell the difference between some years - the inclusion of the year on this issue (and the otherwise identical 1928, 1929, and 1930 issues) makes it easy to identify. Zeenuts were issued from 1911 through 1938.

Thoughts: The coupon was used on this card - there's no way I can afford the super-high premiums for an example with the coupon attached right now. There are two holes punched in my card, which makes me wonder if there was an additional incentive for bringing in the card beyond the coupon. The Zeenut series serves as an important visual record of one of the greatest minor leagues to ever exist, and includes Joe DiMaggio's "rookie" card in the late 1930s. The design is simple - no stats, no borders, no artwork, just a photo with a little bit of text. My card of LA Angels player Krug shows what appears to be a hint of recently-opened Wrigley Field (the Los Angeles one), shot from foul territory in left field.

Additional Links: Old Cardboard is my go-to resource for sets such as this. All 28 years of Zeenut cards are grouped together on one page here.
Posted by Ryan G at 3:13 PM