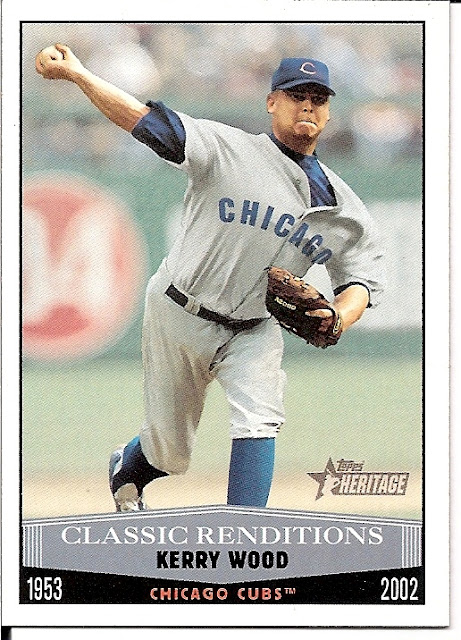 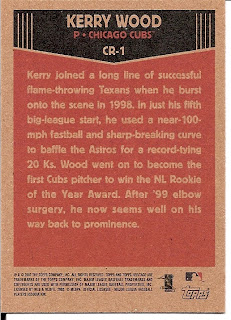 Front Design: The cards are supposed to show the player in 1953 team uniforms. A "painted" image of such is shown on the front, inside a thin black border. The bottom of the card contains the player's name and the set's name in a banner, beneath which is the team name.

Back Design: The gray cardstock backs repeat the banner design at the top, with the player's name, position, team, and card number. A short biography follows in a red box.

Parallels and Similars: An autographed version exists for three of the cards.

Distribution: Classic Renditions were inserted 1 in 12 packs of 2002 Topps Heritage.

Thoughts: I know Kerry Wood was a big name back in 2002, but the Cubs uniforms really haven't changed too much in 50 years. I like the idea of throwback uniforms, and I think it would be great if Topps took advantage of all the games that feature throwback uniforms to put together a couple insert sets showing players in older threads. The same could be done with some of the special event uniforms (such as Fourth of July). There are several teams that use alternate jerseys on Sundays which would be great for inclusion as well - perhaps a whole 30-card insert, with each card having four variations - home, away, throwback, and alternate. This would be a good idea for a set like Opening Day if done simply, or a painted set like Gypsy Queen where the different uniforms could be painted on to the players in the same image. Call the set "Alternate Threads" and have a relic parallel set for some of the players.

By the way, I think we're finished with Heritage for a while. I'm not sure how I ended up with so many Heritage cards, of several years, all at once.
Posted by Ryan G at 8:49 PM