There's no better place for me to start this blog than with the set that started my collecting career. 1989 Topps holds a special place in my heart. My background on collecting is already written here, so feel free to read it if you haven't already.

Unlike my other blog, which contains a varied source of material, I plan for this one to focus on one card set per post. I'm not sure if I'll be able to write a meaningful post every day, but that's the plan anyway. You'll see card sets from today, twenty years ago, and one hundred years ago, though the focus will generally be on modern cards. Cards featured in this blog will generally be the ones used in my type set collection which I've been referring to lately as my Sampler Collection.

Yes, I realize there is at least one more Type Set blog, and it is fantastic. Be sure to check it out!

If I were to show one card from every set ever made to this point, per day, I would be posting for the next 85 years, so I think I'll be set on content. I'll combine some sets together, such as I'll be doing today, which will certainly help!

Now, on to the show.

Front Design: The vertical card fronts have white borders with a picture framed in a team color. The top-left frame corner is curved and the Topps logo generally appears in that corner of the photo. When the logo interferes with the photo, it appears in the lower left corner. The bottom right corner of the card front contains the team name in script format, while a curved banner beneath the team name contains the player name. The card stock is brown/gray.

Back Design: Backs are horizontal and symmetric in design, using black printing on varied shades of red. The player's name, position, vital stats, and complete career statistics are found; if space allows, a short blurb and monthly scoreboard fill up the bottom of the card. Card numbers are easy to read in the upper-left corner.

Parallels and Similars: The design was duplicated (with baby blue borders) for a small series (16) of cards that appeared on the bottom of wax boxes. The design was also used for the 132-card Traded factory set, as is standard procedure for these sets. Full parallels of the base and traded sets were issued called "Tiffany" sets, limited to 15,000 copies, and printed on glossy white card stock. A partial (396-card) parallel set of the base set was issued in Canada called O-Pee-Chee. O-Pee-Chee sets differ from the regular Topps cards by the use of the O-Pee-Chee logo instead of Topps, a lighter card stock, and bilingual (English and French) on the back. The box bottoms were also paralleled on the O-Pee-Chee boxes.

Thoughts: Being the first cards I ever had the joy of opening from a pack, the set is near and dear to my heart. However, the cards don't feature team logos and the design, while clean and unobstructive, is uninspired. Photographs generally lack action, though image quality is generally acceptable for a non-premium set.

Additional Links: Wikipedia has a surprisingly detailed list of Topps products released that year. The Lifetime Topps Project 1989 Topps Overview page breaks the base set down by components. 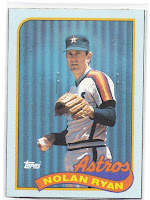 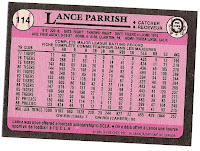